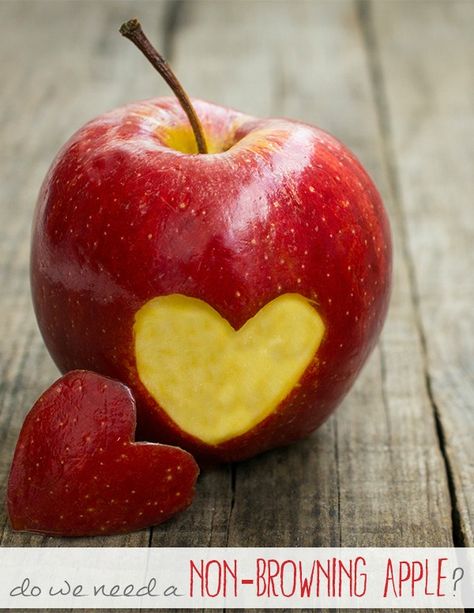 What is a GM (Genetically Modified) Apple?

Genetically modified food is created by science, not nature. The non-browning apple has been genetically engineered so that it won’t brown if bruised or for 15-18 days after being cut. To ‘silence/stop’ the browning gene, they insert two different bacteria, a plant virus with some genetic material from an apple into the apple cells. If you translate what ‘non-browning’ means for consumers – you are eating a GM apple without knowing how old it is.

Why We Don’t Trust It

In a landscape of consumers marching against GMOs concerned for the depleted number of bees and insects and the rise in so many diseases linked to pesticides, the timing of this apple doesn’t make sense. This arctic apple, non-browning apple, or GM apple, is another modified food that has been approved without animal or long-term studies.

We also know that every cell of the GM apple tree will have the transgene and once the growers start production of these apples, it will cross contaminate soil, water, insects, and any organism (including humans) that eats it. Apple trees are open pollinated and so the action of growing non browning apples in orchards are like opening a Pandora’s box of contamination before proper testing is completed.

How Do We Stop It?

Have you seen the bumper sticker, “If You Are Not Outraged Then You Haven’t Been Paying Attention”? Big agriculture is messing with the fruit doctors have humorously subscribed families eat once per day. An outcry from consumers is what grocery chains and neighborhood stores need to hear. Go to your grocery store and talk to the produce or store manager. Tell them you don’t want them to sell these apples when they are available for distribution. Other foods have been approved and never made it to market because of consumer and food companies’ resistance to it. The US and (very recently) Canadian Governments might have approved this apple, but we want orchards, stores, and brands to hear loud and clear “we do not want this apple!” There is no mandatory labeling of GMOs, so any product that contains apples could potentially contain GM apples. Just think of how many products contain apples.

Thoughts from a Mom

As a North American mom, it is embarrassing to know Canada and the US jointly have produced the only 2 genetically modified fruits worldwide. The first was the papaya from Hawaii and now we have the non-browning apple. The company that created the non-browning (GE) apple also has the technology ready to go for cherries, pears, and peaches. This Pandora’s box of untested food will enter the food system and cause contamination before we are able to control it. And with so many growers, consumers and brands questioning GMOs, it’s simply unclear who drove the need for an apple to be produced that doesn’t brown. McDonald’s and Gerber have publically stated they don’t support the genetically modified apple.

The only clear way to continue to avoid GMOs is to shop organic and watch for Non-GMO verification on food packaging. Constant engagement is required to learn about where our produce, meat and dairy are produced. We are fighting to protect our food system for the next generation and this stage is crucial. For up-to-date information on the GM apple, follow GE Free BC on Facebook, and join the conversation about stopping this fruit from appearing on store shelves.

Latest posts by Green Child Magazine (see all)
Previous Post: « The Buy Nothing New Challenge
Next Post: Health Benefits of Garlic: Why You Should Never Miss Your Daily Dose »