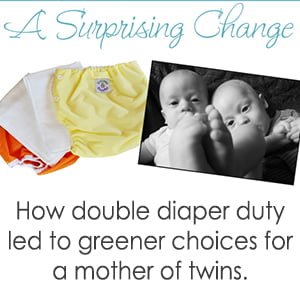 Going the natural route when it comes to parenting is a no-brainer for some families. But a more natural method of diapering your children, that decision is not always made so easily.

This was definitely the case for my family. In 2006, we welcomed identical twin sons into our lives. Feeling blessed would have been an understatement.

Not only were our new babes happy and healthy, they breastfed like champs and quickly adapted to the same routine as each other. They were just an absolute marvel, I couldn’t take my eyes off of them.

With double the babies comes double sympathy and generosity from others. We were gifted so many disposable diapers that they were stacked from floor to ceiling inside one of our closets. Because of this, shopping for diapers and having to deal with the various choices wasn’t even on my radar until our diaper supply began to run out.

I remember pointing out to my husband that we were down to about a package or two of diapers. The boys were almost 4 months old at that point. The realization began to set in: what would have probably provided a year’s worth of diapers to one child, we had just torn through in about four months. It was eye-opening to say the least.

Surprisingly, my husband’s reaction was to say “What about cloth diapers?” This absolutely blew me away.  I had recently come across the existence of modern cloth diapers online, but never bothered to mention them to him because I assumed he would never go for it.

What once would have never crossed my mind as an option was now looking like a viable way of diapering my twin babies. I researched cloth diapers and ended up beginning our “cloth diaper stash” with a handful of gently-used, one-size pocket diapers and inserts.

To my delight, I found using cloth diapers easier than I imagined. My sons looked much more comfortable than they did in disposables. And I knew they were chemical and carcinogen free. Plus, aside from beginning to save money, I felt much better about reducing the amount of waste our family was producing. It had gotten to a point with disposables that I couldn’t even lift the garbage bag out of the can to empty it because it was so heavy with soiled diapers.

My cloth diapering journey began with disposables and led to full-time cloth diapering.  We used  traditional cotton prefolds and diaper covers, just like our grandmothers used.

One Change That Led to a Greener Life

You might think that cloth diapering twins cannot get easier.  But in reality, by eliminating the financial burden on my family with having to diaper twins in disposables full time, it made a big impact. That was one less thing to worry about and, as a mother of multiples, the less you have to worry about, the easier your life is!

Our decision to use cloth diapers led to recycling, composting, gardening and more. In our eyes, it only made sense to continue “greening” our lifestyle since it felt so good to have chosen cloth diapers over disposables.

Author Julia Clark is the mama behind the Cloth Diaper Geek blog. Her twins are now 5 yrs old and although she no longer gets to use cloth diapers, she still advocates them whenever she can.

Latest posts by Green Child Magazine (see all)
Previous Post: « Flee, Flea: How To Combat and Prevent Fleas Naturally
Next Post: Cloth Diapering Basics and How to Find Your Style »