Modeling or teaching respect can be a challenging part of your positive discipline strategy. Today we’re covering some effective (and connective) ways to respond to a disrespectful child. 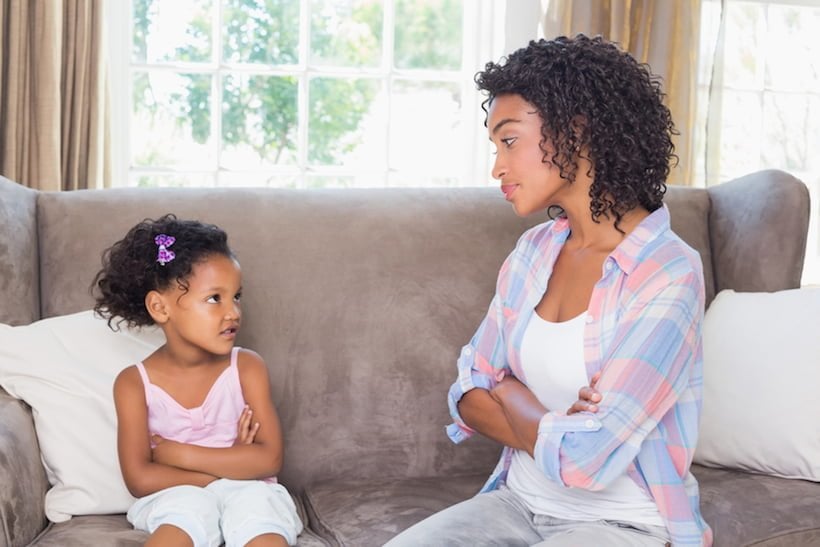 Alicia was at a neighborhood party when her 8-year-old walked up to her and said, “Get me a drink!”

A bit embarrassed, she said, “What do you say?”

Her son rolled his eyes as he sighed and replied, “P-u-l-eeze.”

When Alicia said she’d get it in a few minutes, he demanded, “But I’m thirsty NOW!” When Alicia told him he could get the drink himself, he huffed, “Then why didn’t you just say that in the first place!” Then he stormed off.

Alicia’s face was red as she turned back to the group and saw some of the other parents laughing under their breath and others looking shocked. Each parent had a comment for her:

• “Geez! Kids these days. Don’t worry, it’s just a phase.”
• “Trust me, it just gets worse as they get older. I have teens, I know.”
• “If I don’t give my toddler what he wants I pay the price. I’d rather give in than get a tantrum.”
• “I know how you feel. My child does that, too, and it drives me crazy!”
• “You need to take away all their privileges so they start appreciating what they have.”
• “When I was that age, I’d get smacked on the mouth if I talked to my parents that way!”
• “Oh, just ignore it. If you give it attention, it will get worse.”

Alicia is a loving, respectful parent who also wants to be treated with respect. She actually didn’t think any of this advice was helpful, but also wasn’t sure what to do.

See Also: Logical Consequences: How to Set Limits & Follow Through on Discipline

Back talk and defiant children are problems many parents deal with — especially in this day and age when it seems children (and society in general) are ruder than any of us would ever considered being.

Almost as soon as a child learns to talk, parents can get “back talk.” It can range from outright defiance from a toddler (“No!”), or smart-aleck remarks repeated from school (“Duh, Mom!”), or disrespectful teenagers’ attitudes and words. (“That’s so stupid,” said with rolling eyes.)

Back talk is a trigger button for most parents. It can even make even the most loving, calm, respectful parent throw their manners out the window.

Parents often teach their children that when someone is disrespectful to them, they are still to treat others with respect. Yet, when children are disrespectful to them, they often don’t follow this same standard and digress into disrespectful communication/treatment of the child. That’s because it’s hard to stay tuned in to your intuition when you feel like you are being attacked. And your inner guidance system can get thrown off when your buttons get pushed and your blood pressure rises.

Even if Alicia’s neighbors’ suggestions worked in the short run, there are hidden messages or negative long-term consequences with each one:

• Demanding respect usually escalates the problem and models disrespectful treatment of others.
• Warnings invite defiance.
• Giving in gives the child a payoff for their demanding behavior.
• Saying nothing implies the behavior is acceptable.
• Punishments that are totally unrelated to the offense are ineffective and the child learns nothing about how to behave properly.
• And physical punishment models and condones violence. The child is more likely to respond the same way if treated rudely.

If your child simply needs to learn manners, then a simple reminder, like Alicia’s, might be in order. If you get further lip, like she did, then that behavior needs to be addressed.

How to Teach a Child Respect and Discipline

So, what does work?

A response that addresses the underlying reason.

In any parenting challenge, you always start by identifying why the child is behaving that way. Ask yourself, “What purpose does this behavior serve for the child?”

There is a systematic way to identify this — in seconds, in any situation with any child — which you can learn if you choose, later. For now, just know that listening to your feelings and using your logic is critical when back talk is involved. That’s because it’s usually a trigger button, so your gut alone will often lead to an unhelpful instinctive reaction. 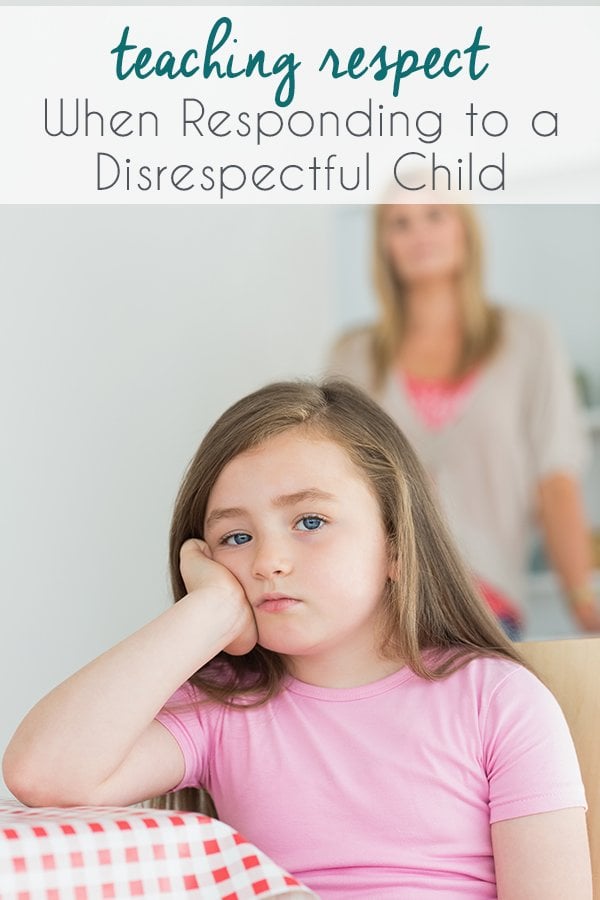 The most effective ways to teach respect address the four most common reasons children are disrespectful, rude, and smart-alecky or back talk:

You want to respond in a clear, concise, respectful way that specifically resolves the reason for the behavior, for that child in that moment, while modeling and teaching respect. Here is your universal formula for an effective response:

1. Acknowledge the child’s feelings or wants, and
2. Express your concern about how the child expressed those feelings or desires.

In your second sentence,

3. Offer an acceptable way for the child to be heard.

Although responses may differ slightly, based on the root issue, here are examples for each reason above.

When children are disrespectful because – they don’t get what they want:

• Acknowledge what they want and state that they need to ask in a respectful way. Teach them what that sounds like, if you haven’t already.

• Tell them the answer is definitely “no” if they ask disrespectfully. If they do ask respectfully, you are at least willing to consider the request and might grant it, depending on what it is.

When children are disrespectful because – they are angry:

• Acknowledge that you understand they are angry and why (if you know why).

• Say you are willing to listen to their concerns, but you only communicate with people who speak respectfully to you.

• Tell them how you do want them to express their anger or opinions appropriately. Give them the exact words to use.

• Then disengage or calmly walk away.

When children are disrespectful because – they think it’s a joke:

• Acknowledge that they may think it’s funny, but since it’s disrespectful, it could hurt someone’s feelings. Jokes make people feel good; they don’t hurt people.

• Suggest it would be nice if they apologize or make amends, but don’t force the issue.

• Drop the subject. Any further attention will reinforce the negative behavior.

When children are disrespectful because – friends/media talk like that:

• Acknowledge that they might talk to their friends that way or hear other people talk that way but “in this family we treat all people with respect.”

• Say that while you’d prefer they talk to all people respectfully, you realize you can’t prevent them from talking this way to their friends. You do expect, however, that they talk to their family members, extended family and the general public with respect.

• Tell them they need to learn “discretion,” to know who they can talk to like that. If they show you that they can’t control when they talk like this, it’s a sign they’ve been spending too much time with people who do talk like this. Therefore, they are showing you they need to spend less time with those people and their social time will be cut back.

• It’s their choice whether they continue to spend social time with friends, based on whether they can show you they can talk respectfully to others.

So, the next time your child gives you lip, remember to keep your own lips closed long enough to take a deep breath. Figure out which of the above reasons your child is being disrespectful. Then respond (not react) helpfully, using the suggestions above, so you will be modeling and teaching respect.

Jody Johnston Pawel
Jody Johnston Pawel is a Licensed Social Worker, Certified Family Life Educator, and one of only a few second-generation parent educators, As the Founder/President of Parents Toolshop Consulting, Jody has trained tens of thousands of parents and family professionals worldwide over the past 30+years, through her dynamic workshops and interviews with the media worldwide, including serving as Co-Producer and On-Air Expert for the Emmy-nominated Ident-a-Kid television series. She is also the author of countless multi-media parenting programs and resources, including her award-winning book, The Parent’s Toolshop®.

Latest posts by Jody Johnston Pawel (see all)
Previous Post: « Ask The Herbalist: Natural Remedies for Hemorrhoids
Next Post: How to Handle Your Child Getting Lost »