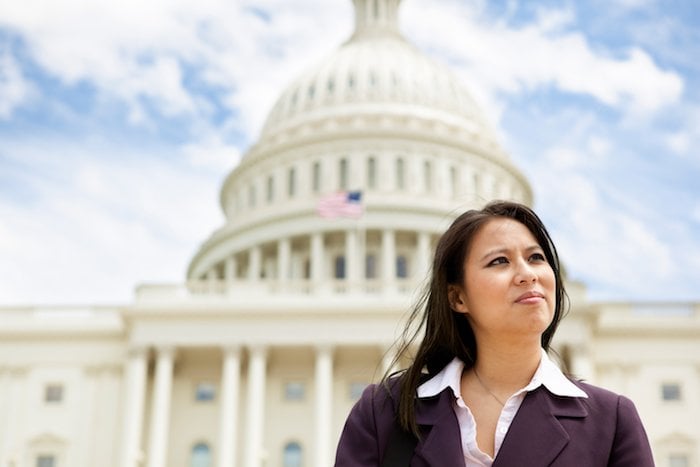 Editor’s note: In these divided times, I’ve sought wisdom on how to effectively stand up for the causes I care about (human rights, the environment, education, general compassion… to name a few) while not resorting to the same hate- and fear-filled rhetoric that got us here. Peggy O’Mara has been my mentor long before we ever actually met. It is her calm voice and reassuring perspective that got me through many a parenting challenge. It is her sharp-yet-kind journalistic advice that has inspired me in my role at Green Child for the past six years. So among the people I turn to for moral support and wisdom, it is her perspective that has given me the most hope and understanding.

There are people like Peggy who have lived through ups and downs like this, and they’ve come through it with the ability to see the big picture. So when she told me she was energized by the level of involvement, I decided to remove, “The sky is falling!” from my mental loop and put my brain to the task of seeing what she sees. I asked her if we could work together on a piece to inspire women on how to take action, and specifically how to put themselves in the position to make change. As usual, Peggy put a great deal of thought and effort in her response, and the following article is the result.

One last thing… this citizen action plan isn’t geared toward one political ideology. If you’re reading this, you’re probably a parent or someone concerned about the environment or healthy food. Use these guidelines to take action and create positive change on the issues that matter most to you, your family, and the future for your children.

There’s an excitement in the air. It’s a nervous excitement to be sure, but people are energized and engaged. It reminds me of the sixties when, everywhere you went, people were having the same conversation. A friend recently said,

“This is what we’ve been waiting for. We just didn’t know it would look like this.”

Some call this excitement and political engagement “resistance” but this is not resistance; this is citizenship. It is what democracy looks like.

Adam Gopnik put it this way in the New Yorker, “Such actions are called, a little too romantically, ‘resistance,’ but there is no need, yet, for so militant a term. Resistance rises from the street, but also from within the system, as it should, with judicial stays and State Department dissenters. Opposing bad government with loud speech, unashamed argument, and public demonstration is not the part that’s off the normal grid; it’s the pro-American part, exactly what our Constitution foresees and protects. Dissent is not courageous or exceptional. It is normal—it’s Madisonian, it’s Hamiltonian. It’s what we’re supposed to do.”

We’re asking questions about our responsibility as citizens because we’re reeling with disillusionment. Our current government serves the bidding of special interests, and our President is a bully. Poverty, hunger, income inequality and racial disparities are pressing social needs that the Republican majority ignores and often exacerbates.

A peer-reviewed study looking at policy data from 1981 to 2002 concluded that the U.S. is dominated by the economic elite. U.S. government policies rarely align with the preferences of the majority of Americans, but instead favor special interests and lobbying organizations:

A Lack of Accountability

Another reason we don’t see the policy changes we want as citizens is because we are irrelevant to the reelection of many representatives. After the 2010 census, the Republicans spent $115 million to radically redraw congressional districts in states like Pennsylvania, Ohio, Michigan, Wisconsin and North Carolina. The districts were redrawn so that they have so many Republican voters in them that they are no longer competitive; Republicans will always win.

It is because our government no longer responds to the needs of the people that we must exercise our duty as citizens. While this lack of responsiveness is not news to people of color, those of us with white privilege may have naively underestimated it. Trump has made it painfully transparent that the government has its own agenda.

What Can We Do?

As we reconstruct a new world view, it is important that we take care of ourselves in the way we would during any other personal crisis. In a personal crisis, we feel compelled to think about the difficult situation all the time, but this is not healthy. We believe that if we think about it all the time, we will not miss anything. But, the opposite is true. We have to find ways to relax and forget about it.

As His Holiness, the Dalai Lama, says, “If when we get into a difficult situation our will or our courage lessens and we fall into the laziness of feeling inferior, thinking that we could not possibly accomplish such a difficult task, this diminishment of will cannot protect us from any suffering. It is important to generate courage corresponding to the size of our difficulties.”

Here are some suggestions for keeping perspective in these extraordinary times:

Curiosity – An Antidote to Fear

Be curious about what is going on. You may feel that you don’t have the time or inclination to engage, but it’s important you do.

Here are some suggestions for all levels of political activism and capacity:

Forty percent of women now plan to become involved in the political process, and a recent Time article reported more than 4500 women have signed up to run for office since the election.

One of the resources mentioned in the Time article is She Should Run, a 501(c)3 that works to expand the talent pool of future elected female leaders and to create a culture that inspires women and girls to aspire towards public leadership.

Emily’s List recruits women for political office. The organization seeks to put women in office who can make significant contributions to education, health care, voting rights, and economic equality and has systematically defined a strategic approach to winning elections that drive progressive change.

The Barbara Lee Family Foundation advances women’s equality and representation in American politics and its core belief is that women’s voices strengthen our democracy and enrich our culture. They offer a downloadable PDF, Keyz to Elected Office: The Essential Guide for Women.

Slate Magazine offers a comprehensive article on resources and organizations to help train you and prepare you for running for office.

A tongue-in-cheek Woman’s Guide to Running for Office tells it like it is.

The League of Women Voters of Westford County, Massachusetts offers a Guide to Running for Local Office in Westford that has general appeal.

All For One: One For All

We can put pressure on our elected officials, put forth local candidates, and run for office ourselves, but it’s also important that we step outside of our circles and expand beyond our particular political issues in order to build a unified social change movement.

Peggy O'Mara
Peggy O’Mara is the editor and publisher of peggyomara.com. She founded Mothering.com in 1995 and was its editor-in chief until 2012. Peggy was the editor and publisher of Mothering Magazine from 1980 to 2011. The author of Having a Baby Naturally; Natural Family Living; The Way Back Home; and A Quiet Place, Peggy has conducted workshops at Omega Institute, Esalen, La Leche League, and Bioneers. She is the mother of four and grandmother of three.