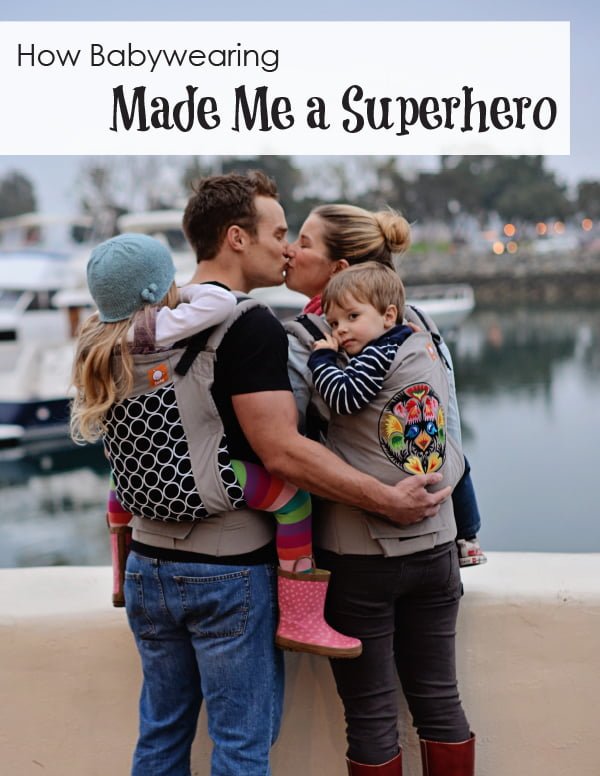 Some of my strongest, most self-assured moments have occurred when babywearing. I distinctly remember the first time I took my daughter out to eat as a new mom.

She was just 6 days old. We had family visiting from out of town, and I was sick of being cooped up. When we got to the restaurant, I situated her in the pouch sling I had stashed in the diaper bag.  She nestled up right against me and slept through the entire meal.

Sure, there was a moment where I dripped soup down the back of her head and felt completely terrible (now I know dropping food on a sleeping baby is a parenting right of passage!), but the meal was lovely. I sat with family and friends and for a bit was able to forget how completely my world had shifted when that baby arrived.

As she grew, I became even more passionate about the benefits of babywearing. I was lucky to live near a very active group, and I gobbled up any information on babywearing that they could teach me. My repertoire expanded quickly from that first pouch. I jumped headfirst into wraps, ring slings, Bei Dais/Meh Dais and buckle carriers.

Babywearing was fun, I made a community of friends, and it just felt right. I loved feeling connected to all the mothers before me, all over the world who met and exchanged this skill and love with each other.

When my son was born two years later, babywearing was a huge part of my parenting arsenal, but I had no idea how vital it would become to just making it through a day. My husband was in the Navy, and although he was able to be home for our son’s birth, he missed nearly my entire pregnancy and returned to his deployment when our son was just two weeks old.

I had a two year-old and a two week-old, and I was on my own.  I had a lovely tribe of mamas and ‘framily’ who helped me keep my sanity during the long days, but… nights were so hard.

My daughter was accustomed to being rocked to sleep, but the baby – well, he was two weeks old. He needed touch at every minute. For a few nights, I sat in tears trying to sway my newborn just enough to soothe him, while not disturbing big sister.

Her little world had been turned upside down, too, with her daddy’s absence and this tiny boy to share her mama’s attention. I didn’t know how I could possibly meet both their needs. I was using babywearing during the day, while running errands, cooking, doing projects with big sister, but I just couldn’t see a solution for nights that met everyone’s needs.

And then a neighbor moved out and gave me an exercise ball. I sat down on it with baby brother wrapped up on my back (I was a very experienced back wrapper and had been teaching for a year at this point) and my daughter came to me for help getting ready for bed.

It was a light bulb moment. I scooped her up and held her in my lap as I had for nearly every night of her life, I rocked her and sang her lullaby, and I cried. Silently, of course, because hallelujah they were both asleep, but there was no hiding my relief. At that moment, I felt like the most accomplished mama ever. I knew we would not only make it through the rest of the deployment, we would thrive.