For many parents transitioning to allergy-friendly or gluten-free diets, Danielle Walker of Against All Grain has become a phenomenal resource.

With her relaxed, welcoming style and her ability to simplify meal planning, Danielle manages to make food restrictions not just tolerable… but like adventurous and fun.

Her debut book, Against All Grain: Delectable Paleo Recipes to Eat Well & Feel Great, made the New York Times best-seller list. Her latest book, Meals Made Simple: Gluten-Free, Dairy-Free, and Paleo Recipes to Make Anytime offers up another serving of delicious and doable recipes and meal plans.

We spoke with Danielle about her philosophy on food, her pregnancy (she’s due within a week from publish date!), and her son starting kindergarten this year. 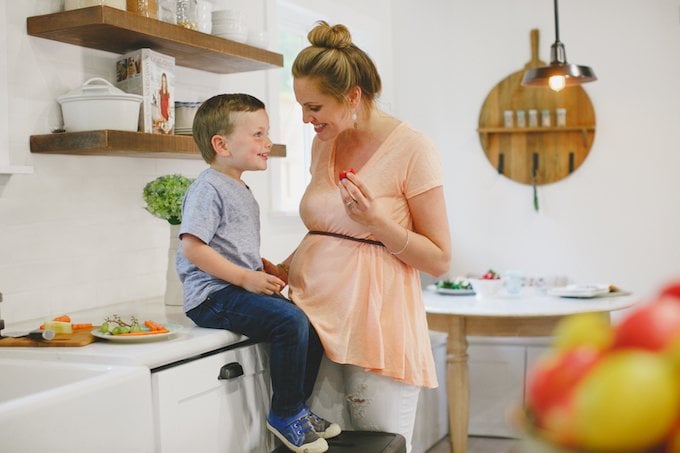 GCM: For our readers who don’t know about your journey into this way of eating, can you share your story?

Danielle: After a few years of suffering from symptoms and multiple hospitalizations, I was diagnosed with Ulcerative Colitis in 2007. No one knew why, which is part of the mystery behind autoimmune diseases. It can be hereditary, but there’s no one in my family who has it. There’s speculation as to whether the disease was dormant and stress from getting married and graduating college could have caused the flare up.

After some of the prescribed medications began causing more symptoms and side effects, I started questioning whether diet could play a part. Specifically because UC is in the colon, I wondered if something I was eating was the culprit.

I asked the doctors, and not a single one of them talked to me about diet. They all said there’s no research to show diet causes or prevents UC. So I left that on the table for a bit. Then I went online to chat boards and community pages to get some information, and honestly to help me feel less alone in my situation, and I stumbled across people who were using diet to help. From that point, I went through a long period of trial and error where I tried everything from eating whole grains and whole wheat to gluten-free.

Then I came across something called the specific carbohydrate diet and that was my first intro into a grain-free diet. I noticed a significant improvement but still had quite a few symptoms. I followed that loosely for a couple of years. But after a really bad flare up when my son was 9 months old, I started to look deeper into what worked for my body.

That’s when I started working with a Naturopath and did a full elimination diet and a series of food allergy testing. Through that, I learned that some of what I was still eating was to blame. By keeping a food journal and cutting many foods out, I was able to pinpoint foods like dairy and legumes as culprits for me. That’s the point where I started eating a more drastic version of the Paleo diet. Then when I cut out eggs, I noticed a significant improvement and have been living this symptom-free version for years now.

GCM: Has pregnancy affected the way you eat or how it works for you? And have you had any wild cravings that don’t meet your standards?

Danielle: I feel so much better eating this way, and I think it’s reflected in my pregnancy. I’ve had more energy and noticeably less morning sickness at the beginning.

I’m typically able to satisfy a craving with one of my versions. I have given in to a craving and gone for gluten-free take out pizza. I’ve also allowed myself a bit of freedom when it comes to ice cream and French fries. But for the most part, I stick to what works for me. My second book has this pepperoni pizza pasta that definitely fills the craving for pizza. I try to go to those things first, and then, if a couple days later I’m still really, really craving the real thing, I’ll let myself have the gluten-free version of it. But it hasn’t been all that bad. No pickles and mustard on a donut or anything (laughs).

GCM: I’m sure your son enjoys all his mom’s great food. Is he grain-free as well?

Danielle: We’re still in that easier zone where we make most of the choices for him. My goal is to give him a good foundation in nutrition, but not to be too strict about it. He isn’t grain-free, but he is gluten-free, because most of things that have white flour and gluten in them tend to not be on the healthy side.

When he has eaten foods with gluten, I’ve noticed he’s a bit more hyper… a bit more ornery (laughs). But I feel like when he’s eating a healthy diet 95% of the time, if there’s a birthday party at school and he wants to try a treat that we wouldn’t normally have at home, I’m okay with it. And as he gets older, I hope he’ll be able to notice how those things feel in his body and that he can understand cause and effect. It’s what’s working for us currently.

He likes homemade food and enjoys being able to take his own snacks to school. At first I thought he might feel left out, but he likes taking his own food. He loves getting involved in the kitchen and making our chocolate chip cookies and fruit roll ups. The more he gets involved and sees the process, the more he will try new foods. Because he is a 4 year old, he does have his favorites and can eat the same thing over and over. Luckily he loves fruits, and there are several vegetables I can count on him to eat. We have a rule that he has to try a few bites so we can open him up to new, healthy foods. If he doesn’t like it right away, we don’t force it. I’m not the mom who makes him sit down and finish his plate. I don’t want him to have bad associations with food. We’ll just reintroduce later, offering other new foods in the meantime.

GCM: Your cooking philosophy seems to involve creating recipes that don’t make people feel deprived even though they’re on a restricted diet.

Danielle: Yes. So, for those of us who have to commit to a 100% Paleo diet or grain-free diet, we can still enjoy a “legal” version of the foods we love. That’s why I recreate cookies or cupcakes at Against All Grain because I think it helps make the lifestyle more sustainable. They can have a grain-free donut to fill that craving and go back to eating the more healthy things the next day.

GCM: Your son starts kindergarten this year. Our readers often ask for advice on meal planning when everyone has activities. Can you share how you’re planning to handle such a busy time with (soon to be) two little ones?

Danielle: Yes, it’s a hectic time, so it’s all about having a plan. I created 8 weeks of meal plans (and grocery lists) in my Meals Made Simple book. Having a plan is the key to keep from going out or ordering in. Stocking your freezer that last week of summer and having a meal plan for those first couple weeks of school is really going to get you off on the right foot.

It’s pretty rare that we eat the same thing too often, and sometimes my husband doesn’t like it. He’ll say, “You know, you made that recipe two years ago that I loved, and you’ve never made it again.” I constantly have to create something new, you know. But we have our fallbacks like taco night and lettuce wrap burgers.

I tell people to choose a few of your favorite meals that are quick and you’re really comfortable making and add them to the rotation on the busier nights.

GCM: What is your advice to families who want to get started on a grain-free lifestyle?

Danielle: Commit and give it a fair shot. The more often you grab a donut or a cupcake; it’s going to be harder and harder to get back on it. Focus on the improvements you see. Really once you see those benefits, it’s hard to turn the other direction and say, “Oh, I want to go back to feeling the way I used to feel.”

I think the reason many people have a hard time sticking to it is that it takes more work. The goal of Meals Made Simple was simplifying and helping you plan a bit of the prep work in advance. It’s not about perfection. If you slip up, just to try to reset and know you’ll do better at your next meal.

Having a healthy breakfast and getting exercise in the morning really helps. I find I make better decisions because I already worked so hard that morning, and I don’t want to go back on the process I made.

For beginners, keep it simple – grilling and crock pots recipes – until you’ve gotten the hang of cooking this way. If you start out trying to make elaborate meals each night, you’ll probably burn out quickly.

Once you’re settled into the routine, step out of your comfort zone and try a different type of cuisine once a week. When you’re trying to switch to a different diet, I think boredom causes failure. I try to encourage people to keep it fresh and exciting by trying new recipes. That will help them not only enjoy time in the kitchen but also the eating, making them feel that the diet is a long-term sustainable lifestyle shift. And always keeping in mind that giving yourself a little bit of grace is really important. 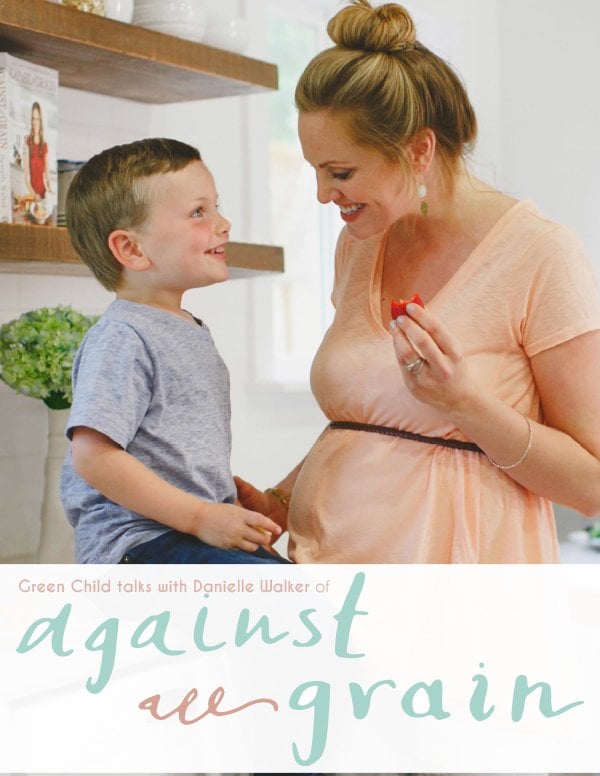 Amity Hook-Sopko
Amity is the executive editor of Green Child Magazine. This role is the perfect blend of her journalism degree, background in corporate marketing, and her passion for attachment parenting and natural living. In her free time, you’ll find Amity paddleboarding on the ocean or the gorgeous Florida springs, at a baseball field with her husband and sons, volunteering at the Humane Society, or outside enjoying nature.
Latest posts by Amity Hook-Sopko (see all)
Previous Post: « 5 Steps to a Simpler School Year
Next Post: Rhythms, Routines, & Rituals »