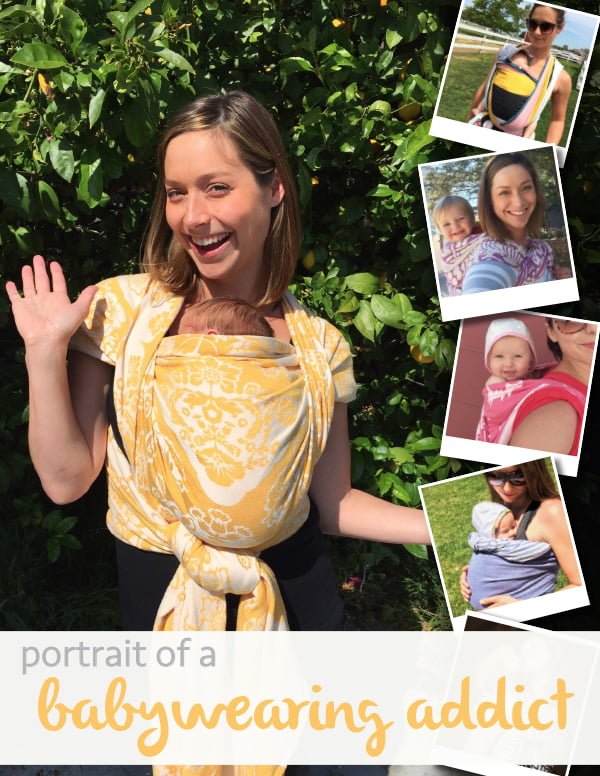 “Could you email Kokoro at exactly 12:15 the capitalized words ‘BAUHAUS PERISCOPE’ and make certain that they’re hash tagged along with my @LynnyMae account?  They’re selling a unicorn hand-dyed hand woven that Coconut Robot wants and will trade the…”

I have NO idea what my wife is talking about.

After I reach in my pocket to pull out my phone, I stare at the calendar thinking about my noon appointment with the CEO of T-Mobile. I know, deep in my heart, that I’ll have an email open and ready to send: I am the blind-eyed enabler to a babywearing addict.

Lynette has a problem. She is a babywearing addict. She is a member of roughly 285 babywearing Facebook groups and our home has two locations showcasing wraps… along with the “emergency wrap” in the car.

The problem started with the lies…

“Honey,” I remember saying. “How many wraps do you own?”

“About seven,” she replied… her eyes darting around the room towards three draped across the arm of our red sofa.

I looked at the seven wraps hanging near the door and thought of the shelf in the bedroom. My innocent question quickly turned on me.

“Some of them aren’t even mine,” her voice went into a higher pitch.

The words rang in my head like an old Just Say No to Drugs commercial. She’s in denial. I check to see if her pants are on fire. They are not. Apparently she is covering well.

I’ve still not spoken a word and she goes into the justification.

“It’s not like they lose value or anything,” she continues feverishly. “People want them, so most of the time I make money. You should really think of it like a bank.”

I purse my lips, push them out slightly and smile as agreeably as I can. The gesture is obviously mistaken for judgment.

“After all, you have your guitars and stuff. This is my thing. It’s the same.”

“I can’t believe you don’t understand,” her face tightens into a red scowl. “You don’t have to be an ass about it, Ryan.” She says my name in the over enunciated way an angry mother would. My nodding becomes more desperate. I want to hide.

“Whatever!” she bolts up from the red couch and storms into the kitchen, “Now you’re going to write about this, aren’t you?”

While the preceding sentence was a blatant lie the following is completely true:

I love that my wife is an avid babywearer, and I support her in it. She feels stylish and beautiful while enjoying a closeness to our children.

I married Lynette because she’s passionate and slightly off, and it was the best decision of my life. So as I’m learning to deal with my wife, the baby wrap junkie, I’d like to share these three steps for accepting (and enjoying) life with a babywearing addict:

They will buy, sell and trade like a wild internet Turkish bazaar. It’s okay. They’re actually making friends and keeping track of money. If your wife or partner has an entrepreneurial bone in her (or his) body, then this can be a great opportunity to flex the muscles of negotiating, building a website, or understanding e-commerce.

My wife has these wraps with cats printed on them and others with little plus signs. They look like little throw rugs to me. Do I tell her? No. They’re all beautiful. I do tell her which ones I think she should keep forever, because there are some very cool ones.

Help with the emails. I’ve won baby wraps for her, and I think that the reason for that happening is because the companies see that a male figure is involved and want to reach out to that demographic. I’ve been a hero quite a few times for helping her out.

In the end, babywearing is an understandable passion and hobby. It physically brings my children closer to their mother. I make plenty of jokes about it (that’s kinda my thing) but there’s nothing more special than a mother whose activities center around being an entrepreneur, more independent, stylish, and loving.

Now if only I could figure out those rings…

Ryan A Bell
Ryan A Bell works in Media Strategy at NASA Jet Propulsion Laboratory. He's also an award winning poet and speaker, and he received the Presidential Award for his volunteer work with Special Olympics and the youth in Oakland. He is a dad nerd who loves engaging in branding & marketing strategies for companies wanting to migrate to live streaming. He lives with his beautiful wife Lynette and three little girls in Berkeley, California.
Latest posts by Ryan A Bell (see all)
Previous Post: « Tech Neck: How to Relieve Neck Pain from Technology Use
Next Post: Roasted Pumpkin Seed Butter »