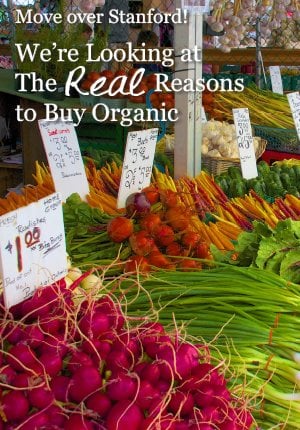 I don’t know about you, but I hate spin. Few things make me madder than an article or study whose primary purpose seems to be to put blinders on the public when it comes to our understanding of an important environmental issue.

The study, titled “Are Organic Foods Safer or Healthier than Conventional Alternatives?” is a review of existing literature comparing the nutritional and contaminant levels of organic versus conventionally grown food.

I’m all for facing the truth when it comes to environmental issues, even if it blows apart my worldview. So as soon as the article was called to my attention, I started digging for details. Here’s what I discovered about the study:

Organic food has nearly 1/3 fewer pesticide residues, significantly lower risk of  contamination with antibiotic-resistant bacteria, and sometimes a slight nutritional edge, depending on the food studied.

So can someone please explain to me why Stanford ran a blog article about the study titled: “Little evidence of health benefits from organic foods, Stanford Study finds” (which seems to have been taken down).

Even more unbelievable is the shortsightedness of the study’s researchers. Here’s a quote from lead researcher Dena Bravata, MD, MS: “There isn’t much difference between organic and conventional foods, if you’re…making a decision based solely on your health.” And one from co-author Crystal Smith-Spangler, MD, MS: “Some believe that organic food is always healthier and more nutritious. We were a little surprised that we didn’t find that.”

Huh? Dena, Crystal, did you bother to read your own study?

and does it really matter?

Just to satisfy my curiosity, I did a little more poking around about the nutrition issue.

Turns out, the Stanford study isn’t the only meta-study on the subject. A similar literature review conducted by Newcastle University showed significantly higher concentrations of a number of nutrients in organic produce.

Even just doing a generic Internet search on “organic vs. conventional food” yielded a number of studies comparing nutrient values. Some of these indicated no difference, while many others did show significant differences, most often in vitamin C and flavonoid content (higher in organic foods) and nitrate content (lower – which happens to be healthier – in organic produce.)

In any case, so what if the scientific evidence of whether organic food is more nutritious is still more or less inconclusive? What if none of the studies had shown any difference between the two?

You heard me right. Whether due to narrow-sighted ignorance or corporate interests (did I mention that Stanford has ties to conventional agricultural giants Cargill and Monsanto?) the whole nutrition issue is a red herring.

the real reasons to buy organic

For most of us, any nutritional advantage to organic food is simply the icing on the cake. The main reasons to choose organic range from personal safety… to social justice… to environmental stability for future generations.

Here are five solid reasons to buy organic that – for whatever reason – Stanford either slighted or neglected to mention:

1) Personal and environmental safety.
Topping many people’s list isn’t what organic food has more of, it’s what it has less of: chemical toxins, including agricultural pesticides and herbicides, along with excess nitrates from chemical fertilizers. Exposure to agricultural chemicals used on conventional food plants has been variously linked to a whole slew of ailments including skin rashes, neurological and reproductive disturbances, birth defects, cancer and death. Given that we eat throughout our lifetimes, and many of these chemicals are capable of bioaccumulation, doesn’t it make sense to limit our (and our children’s) intake as much as possible?

Another item totally missing in organic food: genetically modified organisms (GMO’s.) This is a huge (and controversial) topic in itself, but suffice it to say that many people who are concerned about both their own health and the environment prefer to avoid GMO’s. Whatever you believe about them, the fact is that the long term consequences of their use is unknown. Especially in light of recent research indicating that genetic material from the food we eat can actually affect our own genetic expression, I personally prefer to play it safe and avoid including GMO’s in the food I feed my family. Often the only way to do this reliably is to buy organic.

2) Social responsibility.
Even in the United States, pesticide poisoning in farm workers is a very real problem. Regulations are lax and many farm workers are migrants who fear deportation if they question procedures. The result is that it is not uncommon for farm workers to suffer short term symptoms of pesticide poisoning such as nausea, vomiting, nose bleeds, and dizziness, and long term effects including cancer and reproductive and neurological dysfunction.

Nearly twice as many women as men suffer from pesticide exposure, and it’s common for pesticide residues to go home on workers’ clothes and hair, where they also put children at risk. Raising food organically eliminates this serious problem.

3) Soil and land protection.
My husband and I recently bought a 5-acre farmstead in central Illinois, and are participating in a year-long beginning farmers’ program being offered through the University of Illinois Extension service. This month’s class focused on fertilizer options, and while I haven’t noticed a bias from our instructors towards or against going organic (most acknowledge that it’s not a black and white issue), their explanation of fertilizers made it quite clear that organic methods are far preferable in maintaining soil health.

Plants need 16 different nutrients for optimal health: the three macronutrients nitrogen (N), phosphorus (K), and potassium (P), plus a number of trace minerals such as boron, iron and manganese. Plants take most of what they need from the soil; when plants are harvested the nutrients go with them. Conventional agriculture replaces only 5 of these nutrients with any regularity: NPK, and to a lesser extent calcium and magnesium. Even when the other trace minerals are replaced, it’s generally done directly with pure mineral solutions, separated from the organic material the minerals would normally be associated with in nature. Over time, this approach can exhaust the soil and result in lower productivity and erosion problems.

In contrast, organic agriculture uses materials like manure and compost to enrich the soil. These not only add nutrients but organic matter (humus) to the soil. By doing so, they protect and even improve the structure of the soil, which helps the soil retain moisture more optimally, protects against erosion, and encourages greater resilience in the plants when conditions are harsh (such as during last year’s drought that affected much of the Midwest.)

When a farmer elects to go organic, it’s a pledge to “maintain or improve” the condition and fertility of their soil – it’s written right into the requirements for the USDA National Organic Program. Purchasing organic food helps ensure healthy soils and food for our children and our children’s children. It’s a long-term commitment and investment in a future beyond a mere two days to two years ahead.

4) A vote for jobs.
Organic agriculture is more labor-intensive, which is why organic food tends to cost more. (If you have to pick and choose what you buy organic due to economic reasons, be sure to check out the Environmental Working Group’s Shopper’s Guide to Pesticides in Produce, which identifies both the Dirty Dozen most pesticide-drenched foods, as well as the safest conventional foods to buy.)

But there’s a positive side to the economics of organic, as well. More labor-intensive means more hands are needed, which means more jobs – definitely a plus in our stressed economy. Which, by the way, hasn’t put a dent in the demand for organic food – Stanford’s contribution notwithstanding.

5) Self-empowerment.
One benefit of buying organic food that you don’t hear about too often is actually one of the most powerful reasons to do it. It’s the power it gives you to change the world through your actions.

Choosing an organic apple or pear over a conventionally grown one is easy to do and doesn’t seem like a big deal. But little actions add up, and over time they – and you- do make a difference.

Not that long ago, organic options were only available in co-ops and specialty stores. You had to seek them out. Now, you can find organic selections in nearly every mainstream grocery. And all those organic choices represent real improvements in soil, safer working conditions and real jobs for real people, and safer food for a much greater number of men, women and children.

All because of the little choices you and I, and others like us, make every day when we shop. How cool is that?

Devaluing organic food in its entirety because of inconclusive evidence of its superiority in one area is shamefully short sighted, and benefits no one.

With the possible exceptions of Cargill and Monsanto. 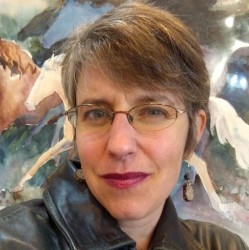 Latest posts by Christie Anne Martin (see all)
Previous Post: « Good For Goodness’ Sake: Fill Your Holiday with the Joy of Giving
Next Post: Baby Safety: 5 Everyday Items To Keep Away From a Teething Baby »