As a new parent, your goal is to keep your baby safe. Here are five everyday items to keep away from a teething baby, so you can set up a safe environment for your new little one.

Did you know that unintentional suffocation is a leading cause of fatal and nonfatal injury among infants and young children?  For babies 12 months and younger, almost 70% of accidental deaths were due to suffocating. 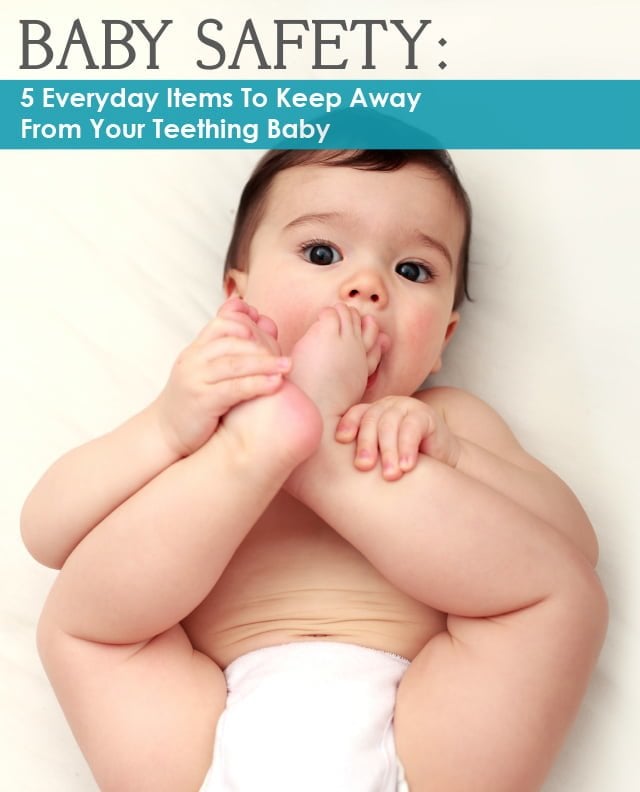 These are worrisome statistics to be sure. But aside from choking, there are other baby safety concerns with everyday items that teething babies end up putting in their mouths; magnets, batteries, keys, vinyl plastic products, and small electronics seem innocent, but pose hidden dangers, too.

Here are the top five everyday items to keep away from a teething baby.

You’re probably thinking of those little refrigerator magnets, right? Yes, they should definitely be kept out of reach too, but I’m actually talking about the small, powerful magnets commonly included with toy sets these days.

Typically smaller objects will pass right through the body – not these magnets! If your baby swallows more than one at a time, they can attract to each other through the intestinal walls, causing pinched or blocked intestines. The outcome can be frightening, leading to holes in the intestines, serious infections, blood poisoning, and even death (source).

Additionally, the Consumer Product Safety Commission (CPSC) warns that sometimes the magnets are so small that a child can inhale them, which would require surgery to remove them from the lungs.

The safest option is to avoid having this style of magnet in your home. If you have an older child who plays with them, monitor very closely to be sure toddlers don’t have access to them at any time.

In the same way that babies prefer the box over the toy that came in it, they also love the timeless allure of keys.

Tamara Rubin, founder of Lead Safe America Foundation, explains “Most keys have 10,000 to 15,000+ ppm lead, and the hazard level for children’s items is only 90 ppm. The first toy my son ever played with in 1996 was his great-grandfather’s keys – seemingly harmless, jingling and even pretty, but even trace amounts of lead can cause brain damage. This was long before my younger sons were lead-poisoned. I had no idea keys could be toxic.” Tamara recommends asking for lead-free keys at your hardware store.

It’s really tough to find a toy that babies will accept as a substitute for keys, so it can be a struggle to keep them from actively working to chew on those grimy, lead-filled keys.

Luckily, a really smart mommy has officially put an end to our misery! Kleynimals is the only stainless steel teether of its kind, made to fill the need for that naturally cool surface and unique metal-on-metal clinking sound. Our babies found them irresistible at first sight!

There are increasing cases of toddlers swallowing batteries, especially the small lithium cell batteries found in remote controls. When it comes to items to keep away from a teething baby, batteries are a fairly easy one to manage.

The CDC has found that more than 40,000 children under the age of 13 (72 percent were 4 years old or younger) went to the ER for battery-related injuries between 1997 and 2010. Fourteen of those children died.

Be sure to keep all loose batteries in a locked drawer or cabinet that is well out of reach. The AAP recommends you secure battery compartments on all electronic items with tape.

BABY GEAR MADE FROM VINYL

Vinyl, otherwise known as polyvinyl chloride (PVC), is widely regarded as the single most toxic of all plastics and is commonly found in baby bibs, teethers, bath toys, bath seats/gear, baby mattresses, pet toys, handbags, and 99% of all inflatable items (including many portable cribs).

PVC is known to contain high levels of phthalates, volatile organic compounds (VOCs), organotins, lead, cadmium and other metals. And to make matters worse, heat and humidity (like that found in little teething mouths!) can increase the release of these chemicals from the plastic.

We’re all guilty of giving in and letting our babies play with electronics. In fact, 58% of parents surveyed by Energizer and Safe Kids said their children like adult electronic devices more than their little-kid toys.

We’ve already talked about the dangers of batteries in remotes, but you should also be aware of a more insidious problem: brominated flame retardants.

Brominated flame retardants, also known as PBDEs, are found primarily in the plastic casing (but also circuit boards) and are most widely used in North America. They are very similar to PCBs, which have been linked to immune suppression, altered sexual development, cancer, delayed brain development, lower IQ, and behavioral problems like hyperactivity in humans. As with PCBs, exposure to PBDEs may be particularly harmful during a critical window of brain development during pregnancy and early childhood. In the 26 years since the ban, numerous studies have documented permanent, neurological impairment to children from low level PCB exposure.

It’s important to teach your little ones that these items are off limits from the start.  If you’re desperate for a safer alternative, choose electronics made by manufacturers who are ahead of the game with the Environmental Working Group’s help.

I know it’s easy to feel overwhelmed – and maybe even a bit paralyzed – when reading this scary catalog of ways your child can be injured. Trust me, it’s worthwhile to make these particular changes a priority.

Just think: you’ll be drastically reducing the risk of choking, but also increasing the chances of good health with less exposure to toxic chemicals in the process!