To prevent sunburns and skin cancer, we put on sunscreen so we can still have fun in the sun without the negative side effects that go along with it. Science has found that oxybenzone, a common chemical found particularly in spray-on sunscreens, contributes to coral bleaching and damaging reefs. So, are all sunscreens damaging coral reefs? 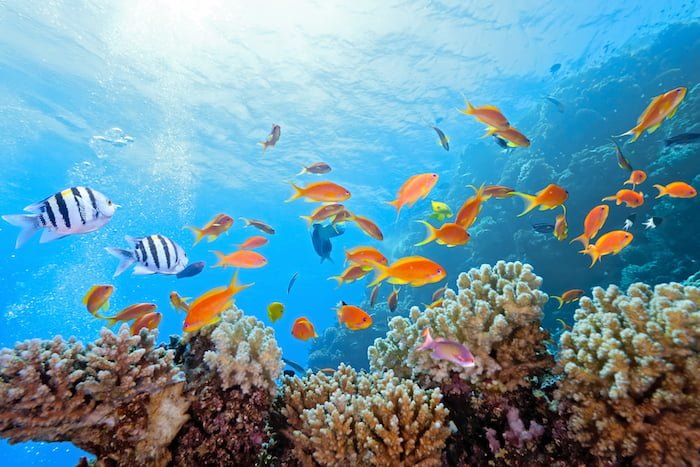 Although feeling the sunlight on your skin can feel too good to stick to the shade, overexposure from the sun’s harmful UV rays can be detrimental to your health. With melanoma awareness month just around the corner, it’s important to keep in mind the serious consequences of being out in the sun without protection.

Here’s what you need to know about sunscreen and its effect on the coral reefs around the world.

So what exactly is the deal between coral reefs and sunscreen? According to one study, when a reef is exposed to the tiniest amount of oxybenzone, the corals that come in contact with it begin to deteriorate as the nutrients within get stripped away.

Due to an infection caused by this chemical, the coral becomes bleached. All of these maladies eventually lead to its death. Oxybenzone is also known to trap young coral in their skeletons, resulting in fatal consequences as well.

What’s even worse – coral located near popular beaches with a high tourist count lose their ability to reproduce and sustain the reef. Other sunscreen chemicals such as octinoxate, 4MBC, octocrylene, and butylparaben have been shown to harm coral as well. It’s not just beach goers who are to blame for this contamination either.

Whenever we put on sunscreen — even if we’re going on a hike in the mountains hundreds of miles away from an ocean — it will still make its way to the shoreline when you take a shower and wash it off.

With thousands of tons of sunscreen polluting reefs every year, it’s a lot for our coral to handle.

What’s So Important About Coral?

Although we should always strive to protect the environment, many probably wonder why we should care what happens to the coral reefs. As it turns out, there are quite a few reasons why. First off, they serve as a home for at least a quarter of the species found in the ocean.

If we lost our reefs, we could potentially lose much more than just coral. An entire ecosystem would be disrupted and displaced by its extinction. The longevity of the coral reefs has major impacts on the wellbeing of humans as well.

Reefs provide sources of food and offer us protection from both natural disasters and diseases since important ingredients for different medicines can be harvested there. They also give a huge boost to our economy due to the tourism opportunities and the jobs created from that. Legislators in Hawaii are seeking to ban the sale of reef-damaging sunscreens.

In the end, coral reefs can bring in billions of dollars for the coastal communities that are nearby. Lastly, coral is a living creature. By doing what we can to conserve the coral reefs, not only would we be protecting the wildlife that call the reefs their home, we’ll be saving the lives of coral as well.

With all this information piling against sunscreen, does that mean we have to choose between our health or the environment? Thankfully, the answer to that is no. Be aware, though, that there is no single sunscreen sold in stores that is 100 percent reef friendly.

Despite changes to sunscreen labeling standards in years past, be wary of the brands that say they’re reef-safe because these kinds of claims and others are still unregulated. Instead, search for sunscreens with the active ingredient titanium oxide or zinc oxide since they do not inflict damage to our coral reefs like the chemicals mentioned before.

It’s also recommended to purchase biodegradable lotion instead of the aerosol variety since you can’t control where all the spray will land. That being said, some particles will get in the water or sand, which will be washed out to sea during high tide.

Consider covering up instead of lathering up.

Rash guards, wetsuits, hats, and even keeping an umbrella with you for instant shade can protect you from the sun without the help of chemicals. According to Divers Alert Network, covering your body with sun protective clothing and just applying sunscreen to your neck, face, feet, and hands can reduce sunscreen pollution by 90 percent.

There are natural sunscreen options as well such as certain plant oils and aloe vera that can replace the use of commercial sunscreen. However, do your research to see which are the most effective before buying a bottle. Even consuming a healthier diet can help your skin fight off the sun’s UV rays better than before, including drinking coffee.

Sunscreen isn’t the only thing to blame for the death of our coral reefs. However, it’s one of the few threats that we can make an immediate difference on. There are several steps we can take to still enjoy the outdoors without experiencing health or environmental consequences. By dressing up and considering more natural and less harmful sunscreens, we can enjoy the sun while protecting our reefs.

For more on which sunscreen ingredients you should avoid, see our guide Everything You Need to Know About Choosing a Safe Sunscreen. But here are some options that are safe for both human health and the environment. 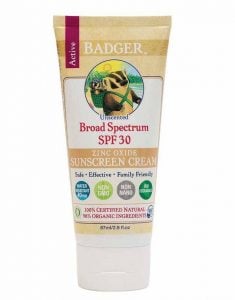 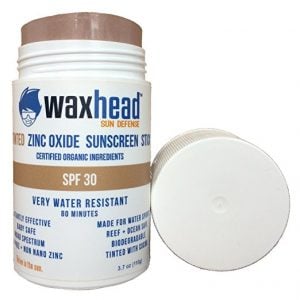 Waxhead Tinted Zinc Oxide Sunscreen Stick contains only 4 ingredients and is great for active outdoor use. It comes in a tube or stick, and this version contains organic cocoa powder so you don’t get the pasty white look. 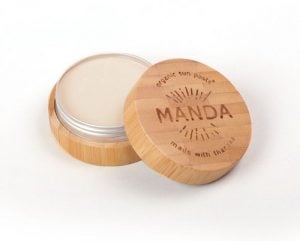 Manda Organic Sun Paste is thick enough to stay on the skin through long water exposure. Made from thanaka oil, this sunscreen is high in antioxidants, is anti-fungal, anti-bacterial and has anti-aging properties.

Latest posts by Green Child Magazine (see all)
Previous Post: « Wait – Asbestos Isn’t Banned in the US?
Next Post: Cool Down Without the Chemicals: How to Minimize Chlorine Exposure While Swimming »