During a trivia session over dinner at ShiftCon this year, we were floored to realize we missed a question about the few substances that have been banned by the EPA. Even though warnings were issued in the 1970’s, asbestos isn’t banned in the US.

More than 50 countries, including the United Kingdom, Australia, the European Union, have banned the use of asbestos. But the U.S. continues to use and import asbestos with no policy for phasing out or regulating this deadly substance.

So, what happened? According to Safer Chemicals, Healthy Families:

In 1989, the EPA issued a rule under TSCA which banned most uses of asbestos. The ban followed 10 years of research and was based on more than 100,000 pages of administrative record supporting the EPA’s attempt to regulate most uses of asbestos, including brake linings, roofing, pipes, tile, and insulation. Two years later, the EPA’s regulation was overturned by the Fifth Circuit Court of Appeals. Despite the court’s acknowledgment that “asbestos is a potential carcinogen at all levels of exposure,” it ruled that the agency’s administrative record failed to demonstrate that the regulation was the “least burdensome alternative,” as required under the current law. Since the court’s ruling, the EPA’s burden to regulate the use of most toxic substances under TSCA has been insurmountable.

What is asbestos and why is it dangerous?

Asbestos was commonly used in industrial and commercial settings from 1930 through the 1970s. The microscopic fibrous material was thought to be a godsend because it was cheap, durable, and able to resist fire and chemical reactions. It was used in numerous products including ceiling/floor tiles, insulation, wallpaper, roofing materials, piping, and cement.

Asbestos can still be found in these items today. If your home, office, or child’s school was built before 1980, there is a high probability asbestos is present in the structure. 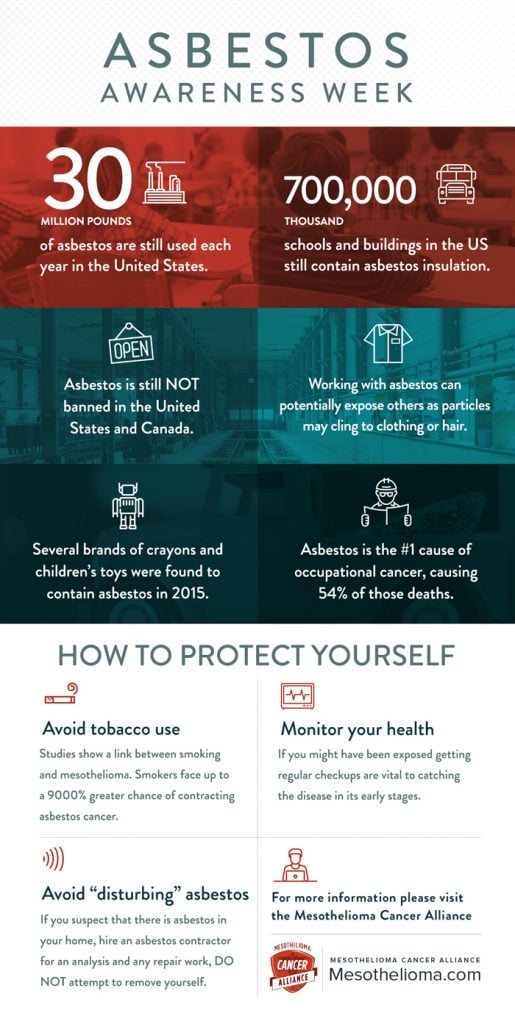 The good news is that asbestos-containing materials pose little risk if left undisturbed and not damaged.
When disrupted, whether through a demolition processes or remodeling, asbestos fibers are released into the air and can cause health complications when inhaled. Inhalation of the fibers may eventually result in mesothelioma cancer, asbestosis, or lung cancer.

The risks of asbestos exposure

Mesothelioma develops when asbestos is inhaled and fibers become embedded in the lining of the lungs, heart, or abdomen. Exposure to asbestos now could lead to a mesothelioma diagnosis decades in the future, symptoms typically do not manifest until 20 to 40 years after exposure. Due to the disease’s long latency period, it is critical that those who may have been exposed to the toxin are aware of the signs and symptoms of the disease. Pleural mesothelioma, which affects the lining of the lungs, is the most common form of the disease and may present with fluid buildup in the lungs, shortness of breath, and chest pain. Pleural mesothelioma accounts for 70 to 80 percent of all mesothelioma cases.

Asbestosis, while typically not fatal, is characterized by the formation of scar tissue on the lungs and can lead to shortness of breath and later development of mesothelioma cancer.There is currently no cure for asbestosis.

In addition to the possibility of exposure from older buildings, it is still legal to import asbestos into the United States. Between 2006 and 2014 there were 8.2 million pounds of raw asbestos entering the country through ports on both the West and East Coasts.

Because asbestos isn’t banned in the US, approximately 3,000 Americans are diagnosed with mesothelioma each year. The highest concentration of mesothelioma cases tend to be concentrated around port cities and along the Rust Belt. Between 2001 and 2010, California, Florida, Pennsylvania, New York, and Texas had the highest number of mesothelioma deaths in the country.

Historically, mesothelioma has been seen as an older adult’s disease with exposure occurring while men were working blue-collar jobs. But more recently there have been incidents of asbestos in items marketed to children. In 2015, an EWG Action Fund test found asbestos in four brands of children’s crayons and two kids’ crime scene fingerprint kits.

Claire’s, a children’s accessory store, made the news last December when asbestos was found in their makeup kits. The tested kits were from 17 different Claire’s locations from nine different states, including stores in Chicago, Greensboro, Indianapolis, Milwaukee, New York, Providence, and Seattle.

Mesothelioma is always aggressive, but there is evidence that the disease can develop more quickly in children and teenagers than in older victims. Life expectancy for those diagnosed with the disease is typically only 12 to 21 months, this preventable disease may impact children at a more alarming rate. With such a poor prognosis and no cure, asbestos awareness is paramount.

How to protect your family from asbestos exposure