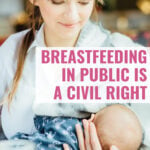 Chances are you’ve heard of a mother being asked to leave or cover her baby’s head while breastfeeding in public. But it’s actually legal in all 50 U.S. states. We hope this article clarifies any confusion and gives you the confidence to feed your child when and where you or they desire.

According to the United Nations Children’s Fund (UNICEF), “Children have the right to life, survival, and development and to the highest attainable standard of health, of which breastfeeding must be considered an integral component.”

Women have the right to accurate, unbiased information in order to make an informed choice about breastfeeding and appropriate conditions in public spaces for breastfeeding, which are crucial to ensure successful breastfeeding.

Breastfed babies normally nurse almost continuously during the first few weeks and months as they are building up the milk supply. Human infants cannot simply be stashed at home while mommy runs off to do her errands. Baby needs to be the mother so that breastfeeding is readily available because breastmilk is low in fat and babies need to nurse often. And as a pillar of Attachment Parenting, parents follow baby’s cues on frequency and time of feeding.

MODESTY IS A DOUBLE STANDARD

The objection most commonly used to oppose public breastfeeding is modesty. But, it is ludicrous to even discuss breastfeeding modesty in the context of a culture in which clothing that reveals a woman’s breasts is well tolerated—even encouraged—in the media, in the workplace and in public, on most other occasions.

While attitudes and customs regarding breastfeeding in public vary from culture and country to country, “In most cultures around the world, breasts hold no sexual connotations for either men or women,” according to cultural anthropologist, Katherine Dettwyler (source).

BREASTFEEDING IN PUBLIC AROUND THE WORLD

Women in Kenya, Liberia, Morocco, Nigeria, Rwanda, Somalia, Uganda, and Zambia breastfeed on demand without hesitation. Women breastfeed without limitations in Israel, Bangladesh, Nepal, Jordan and Iran. In most countries in Central America, breastfeeding in public is a common and ordinary activity.

Mothers in Barbados, Guatemala, Honduras, Trinidad and El Salvador nurse their children everywhere and, in most of South America, breastfeeding mothers confidently breastfeeding in public.

In Germany, breastfeeding in public is widely accepted, yet there is no specific legislation. In the Netherlands, it is common to nurse in public. Breastfeeding is actively promoted in Scandinavia and mothers in Norway, Sweden and Finland are free to nurse in every public location. Even, Pope Francis, in a Vatican City ceremony, encouraged women “to feed their babies anywhere, even in the Sistine Chapel, without thinking twice”

In Australia, the law protects every woman to breastfeed her child in public places and unfavorable treatment of a breastfeeding mother is prohibited. In New Zealand, breastfeeding in public is also assured by law, is common and widely accepted. In Canada, public breastfeeding is a public health issue and mothers feel free to nurse anywhere and rarely experience any criticism.

And, in Mongolia, where wrestling is a national sport, it’s believed that the best wrestlers are breastfed for at least six years. There, they breastfeed anywhere, anytime and in close quarters. According toRuth Kamnitzer, who lived in Mongolia during the time she was breastfeeding her son,

“When I breastfed in the park, grandmothers would regale me with tales of the dozen children they had fed. When I breastfed in the back of taxis, drivers would give me the thumbs-up in the rearview mirror and assure me that Calum would grow up to be a great wrestler. When I walked through the market cradling my feeding son in my arms, vendors would make a space for me at their stalls and tell him to drink up. Instead of looking away, people would lean right in and kiss Calum on the cheek. If he popped off in response to the attention and left my streaming breast completely exposed, not a beat was missed. No one stared, no one looked away—they just laughed and wiped the milk off their noses.”

In my generation, when less than 25% of women were breastfeeding, it was easy to breastfeed under the radar. I don’t remember any bad experiences breastfeeding my children in public 40 years ago. In those days, we were encouraged to breastfeed discreetly, but this advice goes against the grain of young mothers today who are increasingly confident in their body integrity.

But regardless of whether a mom is confident or intimidated about breastfeeding in public, it’s just not that easy to be discreet while breastfeeding, no matter where you are. As Sundae Horn says, “Some of our indiscretions are built into the system. I have big breasts that are hard to hide completely while wrestling them in and out of bras and babies’ mouths. My children have fought against having their faces covered (they want to see me), and both were born with the delightful habit of humming as they nurse. As if that weren’t enough, my 18-month-old daughter has named the act of nursing, “Boop,” which she whines as she tears at my clothing. It doesn’t fool anybody.”

STRATEGIES FOR BREASTFEEDING IN PUBLIC

Knowing your rights and the customs of other countries will, hopefully, give you more confidence breastfeeding in public. But it’s also a practical matter. Living in a bottle-feeding culture requires a little strategy. Not because anything is wrong with breastfeeding in public, but because the US is not a child-friendly society. Here are some things that might help when nursing in public.

Scout out these places ahead of time so you’re already prepared when you go out alone with your baby.

When we face obstacles as a mother with a baby, we often blame things on the baby or on being a mother or on some failing in ourselves. However, many of the obstacles we face as breastfeeding mothers in the US are artificially created by the cultural circumstances of our times and are not our fault at all. In fact, we are the victims of these cultural obstacles. This makes breastfeeding itself and breastfeeding in public, in particular, unexpected feats of political activism.

Walk tall and proud as a breastfeeding mother. You do your part toward the inevitable normalization of breastfeeding. Know that you are on the right side of history and that you are changing the future each time you breastfeed in public.

Peggy O'Mara
Peggy O’Mara is the editor and publisher of peggyomara.com. She founded Mothering.com in 1995 and was its editor-in chief until 2012. Peggy was the editor and publisher of Mothering Magazine from 1980 to 2011. The author of Having a Baby Naturally; Natural Family Living; The Way Back Home; and A Quiet Place, Peggy has conducted workshops at Omega Institute, Esalen, La Leche League, and Bioneers. She is the mother of four and grandmother of three.