There is something truly beautiful about a name that has meanings from various cultures from all over the world. A cross cultural baby name can represent so much more than multiple denotations, it can be a symbol of inclusiveness and universality.

Cross cultural baby names can also represent the various cultures that you and your partner are from, and naming your child with this in mind can be a sweet way to honor your union and new family unit.

Here, take a look at names that are used across multiple cultures:

Aya can mean either “colorful” or “bird”.

This universal name is simple enough to pronounce in multiple languages. It comes from Latin origin and can mean “sea” or “water”.

Dara can make for a nice gender neutral name choice meaning “star” in Khmer, Thai and Lao. In Hebrew, Dara means compassion or pearl of wisdom. In Punjabi, Dara means “leader”. And Dara’s Persian meaning can translate to “rich”or “well off”.

A name of Spanish, Italian and Hungarian origin, Emilia is a super sweet name with a meaning that rivals most, because, well it directly means “rival”.

Gabriel has ties to Christian, Jewish and Muslim texts and has the meaning of “God is my strength”.

Hugo is of German, Spanish and Portuguese origin and means “mind” or “intellect” making it the perfect cross cultural baby name choice for your little thinker.

Kai is another name that has many origins and meanings. It’s been featured on our list of Tropical Island Baby Names, for its Hawaiian ties. In some Europe countries, Kai is is thought to have Frisian origin and means “warrior.” Kai is also used throughout African, Chinese, Maori, Turkish and Native American cultures. Not to mention that it is also another gender neutral name choice!

Most popular in Latin America, the name Luca is also widely used in Italy, Spain, Portugal, Romania, Russia, Serbia, Slovenia, Croatia, Bulgaria, Greece, and Georgia. It is from Latin origin and means “light”.

Marco is a name of Spanish and Italian origin and a great cross cultural name choice for your little explorer.

This pretty four-letter name packs a lot of meaning in its few letters. In Arabic, Mona means “wishes” and “desires”. In Irish Gaelic it can mean “little noble one”. Mona is also sometimes associated with the Greek word monos which means “moon”. Mona is also a Scandinavian short form of Monica

For a name that is simple enough for various languages and different accents to pronounce, this pretty name for girls means “pleasantness” in Hebrew and “honest and beautiful” in Japanese.

While popular with both Spanish or French speaking cultures, Nicolas is actually of Greek origin and means “victory of the people.” It also has Russian ties, when spelled Nickolas.

Victoria is the Latin word for “victory”. In Roman mythology, Victoria was the name of the goddess of victory. The name also has english ties thanks to Queen Victoria. Check out more Victorian Baby Names inspo here!

Dara Emilia: A nice combination of strong and sweet, this name is fitting of a baby with a strong personality.

Adrian Nicolas: A great name for a leader and sea lover alike.

Naomi Aya: What a sweet, serene and oh so pleasant a cross cultural name combo it is. 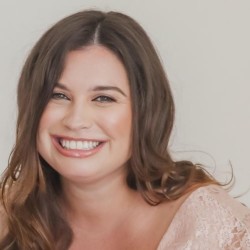 Caitlin Ultimo
Caitlin has been a writer, editor and digital content strategist for various publications and brands, including Parents and Scholastic magazines, Parenting.com, L’Oréal Paris USA and Chewy.com. Caitlin writes extensively on family health and happiness and enjoys sharing personal experiences in order to connect with others through her work. Originally from New Jersey, Caitlin is the proud mama of two Chiweenies (Chihuahua and Dachshund mix), Dodger and Daisy and recent new mom to her baby girl, Valentina.

Latest posts by Caitlin Ultimo (see all)
Previous Post: « Your Six-Week Postpartum Care Plan: A Daily Guide for New Moms
Next Post: Unpopular Opinion: I Am My Child’s Friend »