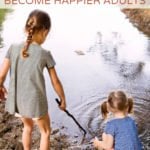 You don’t really need a study to tell you this, but it’s worth noting the science behind our intuitive guess that kids who spend more time in nature become happier adults.

A new study out of Denmark found that living near and spending time in nature is measurably better for your mental health, both short and long term.

The study followed more than 900,000 Danish people from 1985 to 2013 – taking into consideration their education, income, family history of mental illness, and how much green space surrounded them growing up. You can find the full study on the PNAS website.

So, after studying nearly one million people across three decades, they found that “children who grew up with the lowest levels of green space had up to 55% higher risk of developing a psychiatric disorder independent from effects of other known risk factors.”

Nature has a calming and normalizing effect on humans. Spending just a few nights outdoors can reset your sleep cycle. But modern living often separates us from nature and our body’s natural cycles, and many of us are living proof of how the body and mind can suffer.

This effect is backed up by brain studies. When we spend time in nature – a stroll through a park or sitting near a body of water – frontal lobe activity decreases and our brain’s alpha waves (associated with a calm, but alert state) increase. David Strayer, a cognitive psychologist at the University of Utah, found that just three days of nature immersion is enough to “clean the mental windshield.” It has the ability to reboot an overstimulated brains to help us reclaim our cognitive abilities and emotional equilibrium.

The number of “forest schools” — which have long been a tradition in Scandinavia and where much of the learning takes place in natural settings in the outdoors — has grown by 500 percent since 2012, according to Richard Louv, author of The Nature Principle: Reconnecting with Life in a Virtual Age.

Oregon recently passed a ballot measure to raise money for outdoor schools (source) and the state of Washington just became the first state to license outdoor preschools, where much of the play and learning occurs outside.

The Trust for Public Lands (TPL) has just finished a seven-year project to map the parks of the U.S., with the aim of identifying places in need of parkland. “We’ve mapped 14,000 communities, 86 percent of the nation, and looked at who does and doesn’t live within a 10-minute walk of a park,” said Adrian Benepe, a senior vice president of TPL. The organization has a Ten Minute Walk campaign to work with mayors across the U.S. to make sure all people have that kind of access.

The findings indicated that the “higher pace of life and social stress in the most urbanized areas could create a stronger need for restorative environments such as urban green space.”

But don’t sell your condo and move your child to the country just yet.

The study found the participants didn’t necessarily have to live in a forest to enjoy the mental health benefits. Those who lived within a reasonable distance from public parks, urban green spaces, or wilderness areas – and who use them often – can reap the same health benefits.

As often as you can, provide the means and encourage your child to spend more time in nature. Free play is ideal. This is when your child is using his imagination and will stay engaged much longer than when he’s waiting for a parent to direct him.

HOW TO ENCOURAGE FREE PLAY IN NATURE

Kids are naturals when it comes to free play, but it’s always helpful to have a few ideas up your sleeve to combat the inevitable whine, “I’m bored!” The key is to allow your child to use his imagination or direct his own forms of play while you make sure he’s safe.

If you have a nature-shy child, you might have to start off encouraging her with some ideas for playing outdoors. Think back to how you used to spend time outside. You’ll come up with plenty of ways to get them off the screens and out enjoying nature.

Make a point to get outside with your child for at least 30 minutes every day. In her book, There’s No Such Thing As Bad Weather, Linda McGurk encourages parents and educators to get kids outside no matter the weather. Add another layer or run back in for dry clothes if needed. McGurk explains that parents, educators, doctors, and nurses in Scandinavia understand that it’s refreshing and good for the body and soul. “So we’ve adjusted accordingly ⏤ kids are expected to dress for the weather, with their rain gear when it’s rainy and snowsuits in the winter.”

An easy way to spend more time in nature is to have lunch or dinner outside. As they say, an object in motion stays in motion. In this case, a body outside stays outside. Try foraging for one aspect of the meal or dessert!

Aside from the health benefits of eating the fruits (and veggies and herbs) of your labor, growing a garden is a fun way for kids to learn about the world around them and the importance of taking care of it. The daily upkeep also gives a great excuse to get the family outside each day.

Some kids can run around their own backyard for days on end without a complaint. Others find themselves growing bored with the same location. It’s always fun to mix it up by something as simple as visiting the yard or neighborhood of a friend or family member. Or explore a local green place, campsite, nature trail, or park.

Whether a far-off hiking trail, a family-friendly bike trail, or a simple walking trail, going free range doesn’t have to mean romping through the fields like the Ingalls girls (although that’s fun, too). Search Trail Link to find a trail near you.

Amity Hook-Sopko
Blending her journalism degree, background in corporate marketing, and her passion for natural parenting, Amity serves as the executive editor for Green Child Magazine. In her free time, you’ll find Amity paddleboarding on the ocean or the gorgeous Florida springs, at a baseball field with her husband and sons, volunteering for an animal charity, or outside enjoying nature.
Latest posts by Amity Hook-Sopko (see all)
Previous Post: « Most Popular Baby Names on the Rise for 2021
Next Post: Natural Baby Sleep Aids and Baby Sleep Products 2021 Guide »